The next generation in self-defense technology.

The ARX Bullet from PolyCase is designed to not expand. Injection molded from a special blend of a lead-free, copper-polymer matrix that is designed to be tough enough to penetrate soft targetrs an tissue, but to break up when encountering tougher barriers in order to reduce risk for collateral damage due to over-penetration. Even though this round travels at a higher velocity, it will not defeat soft body armor.

Even with the heaviest of clothing barriers the terminal performance of the ARX bullet will not be effected. The ARX penetrates straight until it encounters soft tissue, upon entering the soft tissue the specially designed grooves in the round harness the rotational energy of the bullet during the initial 6″ of penetration.

The features in the nose of the ARX round also create a hydrodynamic ram which compresses the tissue ahead of the bullet, creating an envelope around the bullet.

Due to the envelope of soft-tissue, the bullet then tumbles in a controlled and predictable fasion that delivers highly consistent terminal performance that equals or exceeds traditional defensive ammunition designs. In soft tissue the ARX bullet is designed to penetrate 12″ to 14″ every time.

Safe for use in suppressors! This round will not disintegrate in the barrel like sintered bullets.

Many of the new products rolling out onto the shooting market each year are variations or improvements of existing designs. But once in a while, something unique arrives. Earlier this year, I had the opportunity to travel to Savannah, Ga., and meet with the team at PolyCase Ammunition to learn more about the company’s fundamentally new approach to bullet design and manufacturing.

The ARX bullet came about in the pursuit of creating single-use ammunition for national security forces. In many countries, terrorist organizations and cartel members pick up spent brass cartridge cases (the single most difficult ammunition component to obtain) that were left behind by government security forces, and reload them with homemade lead bullets and propellant extracted from fireworks. Starting in 2011, retired Lt. Col. Paul Lemke teamed with Juan Carlos Marin, an engineer from Spain, to develop a nylon-based cartridge case that can be loaded only one time. Thus the company name of PolyCase. The firm’s first success was a .380 ACP cartridge case with a zinc-alloy base and nylon body.

The nylon and polymer materials in these cases, however, do not work reliably with conventional, copper-jacketed, lead-core bullets. So, the team at PolyCase had to devise a projectile containing enough polymer to function reliably in the nylon cases. This lead to the development of the Inceptor line of bullets. 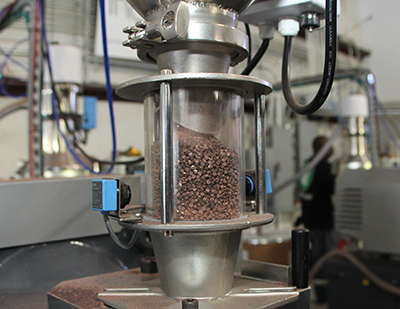 Unlike conventional, copper-jacketed, lead-core bullets, PolyCase projectiles are manufactured by way of high-pressure injection molding. The bullets are comprised of a heated mixture of powdered copper and epoxy/polymer resin, and any excess molding material generated during the process is ground up and reused.

Unlike conventional jacketed bullets, which require several steps and a good deal of heavy equipment to shape, Inceptor bullets are made by the high-pressure injection molding of a heated blend of powdered copper and epoxy/polymer resin. After it cools a bit, the mold opens and a cluster of bullets fall onto a conveyer belt to be collected and smoothed before loading. The excess molding material (called sprue) is ground up and reused. Injection molding is fast and efficient, allowing for high production volume with very little waste.

The result is a lightweight projectile with several desirable qualities. The bullets are lead-free, allowing them to be used in jurisdictions and facilities that restrict or ban the use of lead-based ammunition. The polymer/copper material maintains its integrity as it travels down the barrel and strikes soft targets, but it fractures when it hits hard targets such as steel plates or building materials—greatly reducing the chance of ricochets. After the bullets have been fired, the copper can be reclaimed by heating the bullet fragments to burn off the polymers. 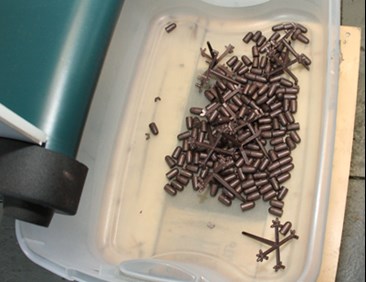 It’s a fairly straightforward process to make solid, round-nose bullets using the injection-molding process. However, the polymetallic blend of materials does not lend itself to the production of the hollow-point bullets commonly used for self-defense. The formulation has to be tough enough to survive loading, firing and flight into the target, which means it’s too hard to expand on impact. With that in mind, PolyCase went back to the drawing board once more to find a way to manufacture a non-expanding bullet with effective terminal ballistics comparable to a hollow point.

The end result of the company’s R&D is the ARX bullet, a patent-pending design that takes full advantage of the flexibility provided by injection molding. PolyCase ballistics engineers—along with third-party aerospace and fluid engineers—spent months experimenting with aero and fluid dynamics using Finite Element Modeling (FEM), which led to the design of uniquely shaped flutes, or channels, the company calls Power Blades. The flutes act to displace the target material using the bullet’s forward and rotational momentum, or “lateral force dispersion.”

Imagine an outboard boat motor running at full speed with the propeller blade suspended in the air above the surface of a lake. The blade’s fast rotation might generate a bit of a breeze but not much else will happen. Now imagine plunging that spinning blade into the lake. It would cause quite a splash as the kinetic energy is dispersed into the water, a much denser medium than air.

The ARX bullet functions in a similar fashion. As the bullet spins through the atmosphere, the flutes do little to disrupt the air it passes through. But as the bullet comes into contact with a fluid medium, such as 10 percent ballistic gelatin, the fluid within the target is suddenly and forcefully churned by its flutes. The fluids are thrust out and away from the bullet at velocities that are anywhere from one-and-a-half to two times faster than the velocity the bullet is traveling.

For example, if a 74-gr. 9 mm Luger ARX bullet is traveling 1450 f.p.s., the fluids will move through the flutes and away from the bullet at somewhere between 2175 to 2900 f.p.s. When the ARX bullets are launched at rifle velocities, the effect is amplified. Firing a .45-cal., 140-gr. projectile from a .458 SOCOM cartridge at 2500 f.p.s. generates fluid displacement at velocities ranging from 3750 to 5000 f.p.s. Due to the law of energy conservation, this increase in fluid speed also creates a decrease in pressure (known as the Venturi Effect), which, in turn, increases the effect of cavitation. Thus the terminal effects of the ARX bullet in a fluid medium include the production of a large temporary cavity, a generous permanent cavity and deep penetration without bullet deformation.